The Vintage Floor Tile Company was born from a recognition of a lack of suppliers offering original vintage floor tiles. Now a well established company we boast the largest stock in the UK of reclaimed original vintage geometric and encaustic tiles.

Contact us for more information on:
info@thevintagefloortilecompany.co.uk
or call us on 01233 850082

Get a quote Sell us an item

We will be relocating the stock of tiles currently held in Tenterden to our larger storage facility in Manston at the start of Aug. This warehouse will be only open for appointments and on a limited basis. We will aim for orders to still be dispatched within our 10 day timescale once the tiles are organised.

We can guide you through the buying guide step by step to help create a unique and stylish geometric floor from reclaimed vintage tiles which have been around for 100 years and will hopefully last another 100 years. These floors can include lots of different shapes, colours and sizes of geometric tiles as well as encaustic tiles.

Where to find us > 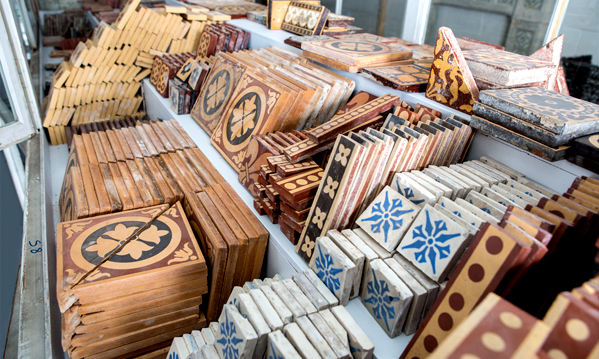 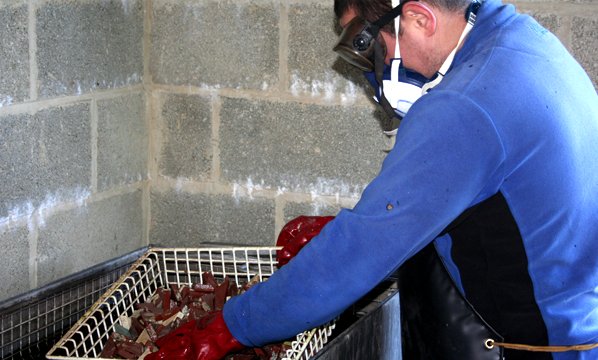 Reclaimed tiles are sourced from all sorts of properties including churches and cathedrals and they often have a story attached to them which makes them even more interesting.

Original tiles from us will be supplied cleaned, restored and we can deliver. If you are unable to come to the showroom we can work from a client supplied picture or from one of our designs featured on the gallery. For details of the full in-house restoration service please refer to restoration.

We can advise on how to install and recommend specialist companies who can lay the floor tiles professionally for you. Our stock is the largest in the UK and covers many tile styles from the Victorian and Edwardian era.

Contact us for more information on:
info@thevintagefloortilecompany.co.uk or call us on 01233 850082 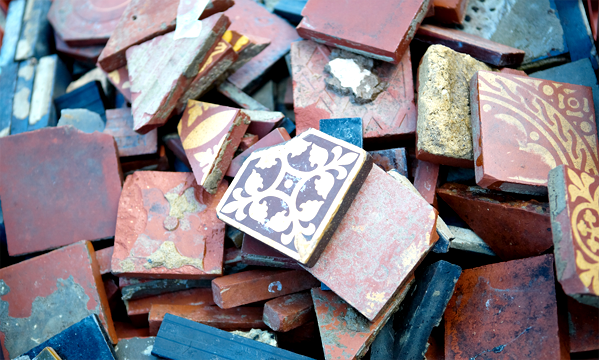 THE HISTORY OF TILES

Geometric and encaustic tiled floors started to appear in public buildings, churches and the more expensive Victorian villas. Their rise to fashion was assured by their use in such prestigious buildings as the Victoria and Albert Museum, and by the 1890s they had become an essential feature in the most ordinary Victorian terraced houses from Dover to Aberdeen. As well as adding prestige and colour to a Victorian hall, they were also remarkably practical. Although it’s improbable that the average Victorian builder gave much thought to the lifespan of such a feature, it is a fact that most domestic interior tiled floors have survived 100 years of family wear and tear. With a little care, they will probably be good for another 100 years. There can be few other floor finishes that offer such durability, while looking so good.

Although these floors fell out of fashion during the 1960s and ’70s, when many of them were covered over, they are now being rediscovered by their present owners and restored to former glory. Although many need a significant amount of work carried out they are generally repairable.

Many of the manufacturers of plain geometric tiles also made encaustic (patterned) tiles, using a medieval technique re-invented by Herbert Minton, which involved inlaying layers of different coloured clays to create a design. His company was particularly successful and ‘Minton’ is the name most commonly found on the back of original encaustic tiles, although there were several different companies which incorporated the Minton family name. Encaustic tiles were most commonly two-colour that is to say the body of one colour (red for example), impressed with a pattern filled with a different colour (such as buff). However, there are plenty around with three and four colours, and you can find them with five or six colours with a bit of searching – the Palace of Westminster has good examples.

Encaustic tiles were used relatively sparingly in geometric design as they were always much more expensive than plain geometrics tiles. Such tiles can show some excessive wear after a hundred years or so, as the secondary colours were added in the form of liquid clay slips, and so were often softer than the main body of the tile. Different inlay colours wear at different rates, so it is quite common to find one particular colour completely worn away, and ridges appearing between the other colours in the design.

Most floors were laid to a very high standard, although on careful inspection, the odd mistake can usually be found. Grout lines are usually so fine that many people think these tiles were butted together. That was rarely the case, most floors were laid with a fine grout line to allow small dimensional differences.

Tiles were always laid in a wet mortar screed, and the skill of the tilers can be appreciated in the flatness and alignment of the tiles. Designs were normally set out centrally from the main entrance. Again, the skill of the tilers in setting out must also be recognised. The bedding screeds originally used were normally very hard. Some of the earlier floors (particularly in the Midlands) used a softer lime based screed, but after around 1880 almost all floors that have been encountered in the South East used a hard lime and Portland mix.

Loose, broken and cracked tiles are the most common faults found in Victorian and Edwardian tiled floors. Individual loose and broken tiles are normally the result of wear and tear and can be simply replaced. Wear and tear can of course embrace impact damage, where something heavy has been dropped on the floor. In such cases, the exposed bedding needs to be closely examined, to see if it is showing cracking or any sign of sinking.

Larger areas of loose tiling are normally due to some kind of movement in the floor structure. As the screed used to bed the tiles is normally very brittle, tiled floors cannot tolerate any significant deflection without cracking. Once the screed cracks, the adhesion of the tiles to the screed will begin to fail. The cause of movement must be identified and corrected before any re-tiling takes place.
The Vintage Floor tile Company was set up to fulfil a need to supply tiles for the repair of existing floors and also to supply complete original floors. It was noticed that there was a gap in the market, no other company can supply original restored tiles exactly as either specified by the architect, client or contractor. With an ever growing stock of in excess of a million tiles it is relatively easy to match your existing tiles so that an invisible repair can be carried out or we can supply the tiles to create a new floor either to a Traditional design or to your design using existing tiles.